They say a picture paints a thousand words, so, I decided to put it to the test with this shot I took while out on my Sunday spin in the outskirts of south county Dublin, overlooking the Dublin and Wicklow mountains this fine Autumn day.

In the foreground is Brittas Lake, from which flows the Camac River in a northeast direction through the Slade Valley towards Saggart and on through Dublin county and city, entering the river Liffey near Heuston Station. Along its route, just north of Saggart Village, are the remains of the disused Swiftbrook Mill, which using the flow and waters of the river, produced the paper upon which bank notes were first printed in Ireland, and also the paper upon which the 1916 proclamation was written. Indeed, Swiftbrook Mill was renowned for producing some of the finest quality paper of the many papermills that dominated the industrial landscape of Dublin in the 18th century. It is believed the secret lay in the purity of the water of the river Camac. Around 1760, it was decided to build a culvert to divert water from the Lisheen River. A sluice was constructed at Aghfarrell, channelling the flow away from the more southerly Blessington Lake and into the Brittas Lake, and the increased volume of water led to a greater flow in the Camac river.

Among the hilltops in the rearground behind the lake are the Kilbride Circuit comprising Seahan (648m), Seefingan (724m), and Seefin (622m). The fourth member of this quad, Corrig (618m), is obscured in this view behind the taller Seahan. Coincidentally, Corrig is also the odd one out in that it is the only summit that does not have a megalithic tomb.

In between Seahan and Seafingan, and closer to the latter, you can just make out the RTE mast at the summit of Kippure Mountain. While the mast, which stands 127m tall, is the oldest television transmission station in Ireland, Kippure itself, at a height of 757m (2,484 ft), is Dublin’s tallest peak, but only just, as the county boundary with Wicklow passes through the summit.

In between the lake and the circuit hills, you may just make out the profiles of the lower Black Hill and Butter Mountain. Between these hills and their taller neighbours behind, is the Shankill Road which connects Ballinascorney Road to the north with the R759 to the south, which also passes the Kilbride army base. For the road cyclist, this is a rare treasure: a remote, rural, winding road with a pristine surface, nothing but the best for our military colleagues, and a must inclusion in any cycling itinerary in the vicinity.

Further back in the right rearground, you can see the peaks of Carrigvore, Gravale and Duff Hill; three peaks which bring you from the Sally Gap up onto the shoulder of Mullacleevaun East stop and on up to Mullacleevaun itself, out of shot, but which at 849m (2,785 ft) is Wicklow’s second highest peak and Ireland’s 15th highest.

Back to the Kilbride Circuit, and starting with Seahan. The name seems to derive from Suiochan which in turn has possible associations with the seat of the widow’s son. At or near its summit are no fewer than 3 magalithic tombs. To the east is a passage tomb with granite kerbstones and a cairn of some 21m in diameter, capped by a large granite stone. Closer to the summit itself is a second cairn that is not believed to have ever been excavated. Alongside it is a triangulation or trig pillar, a legacy of the retriangulation of Ireland which commenced in 1959. Further west lie the remains of a third tomb, this time a wedge tomb, a type more commonly found at lower elevations. The tombs themselves are estimated to be about 5,000 years old.

Over to Seefingan, which comes from Sui Fionnagain. Whilst the derivation of the name remains uncertain, the term sui or suigh being the Irish root word for sit, suggest a seat or sitting place. As regards Fionnagain, this is not verified but is likely the name of a person associated with the seat. One suggestion is that it is the son of Fionn Mac Cumhail, the legendary chief of the Fianna, the roaming army who guarded Ireland for the High King way back when! This is the tallest peak of the Kilbride Circuit, and it is not believed that the cairn here has ever been excavated.

And finally, Seefin. Here there is a passage tomb that was excavated in 1931 and is believed to date from the period between 3,000 and 5,000 BC. Now it is true to say that this area does have associations with the legend of Finn Mac Cumhail and the Fianna, who frequently patrolled these parts. So it is hardly a stretch that the name which derives from Sui Finn, is said to have been the seat of Fionn Mac Cumhail himself. Whatever the true origin of the name, the views both from and looking up to these hills and their conspicuous megalithic tombs would surely have inspired the imaginations of those who inhabited these parts over the centuries.

And last but not least, what about the sky? It does occupy at least a third of the photo’s real estate after all! Well, it’s perhaps fitting that we see on this seldom enough seen near complete blue sky, save for the occasional strands of cirrus as they sign off on the last of our Indian summer, as we brace ourselves for the turbulence to come.

And perhaps this is a timely signal to me that it is now time to hang up the pedals and don the boots, change the clothes and pack the sack, and start planning for the hiking season in the months ahead.

So there you have it, the saying is true, a picture does paint a thousand words, as I see the word count of this post reaching the majic thousand number, on the button! 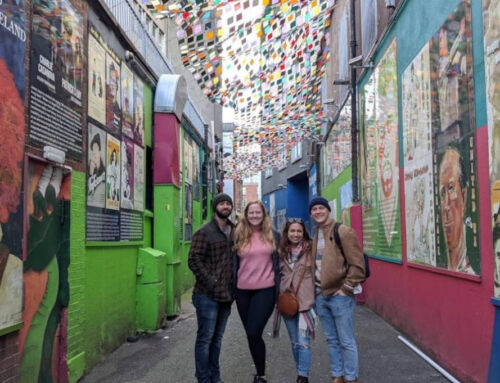 What to see in Dublin over a weekend? 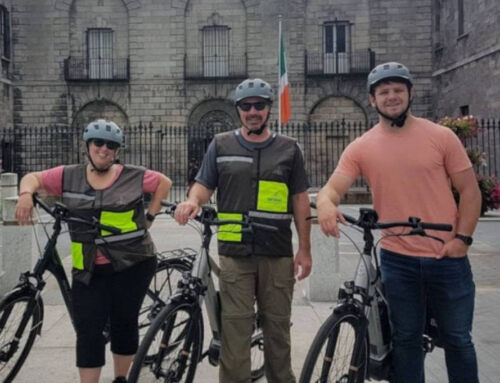 Things to do in Dublin 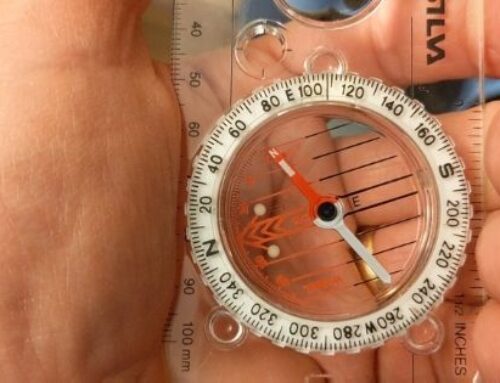 Navigating with a Map and Compass