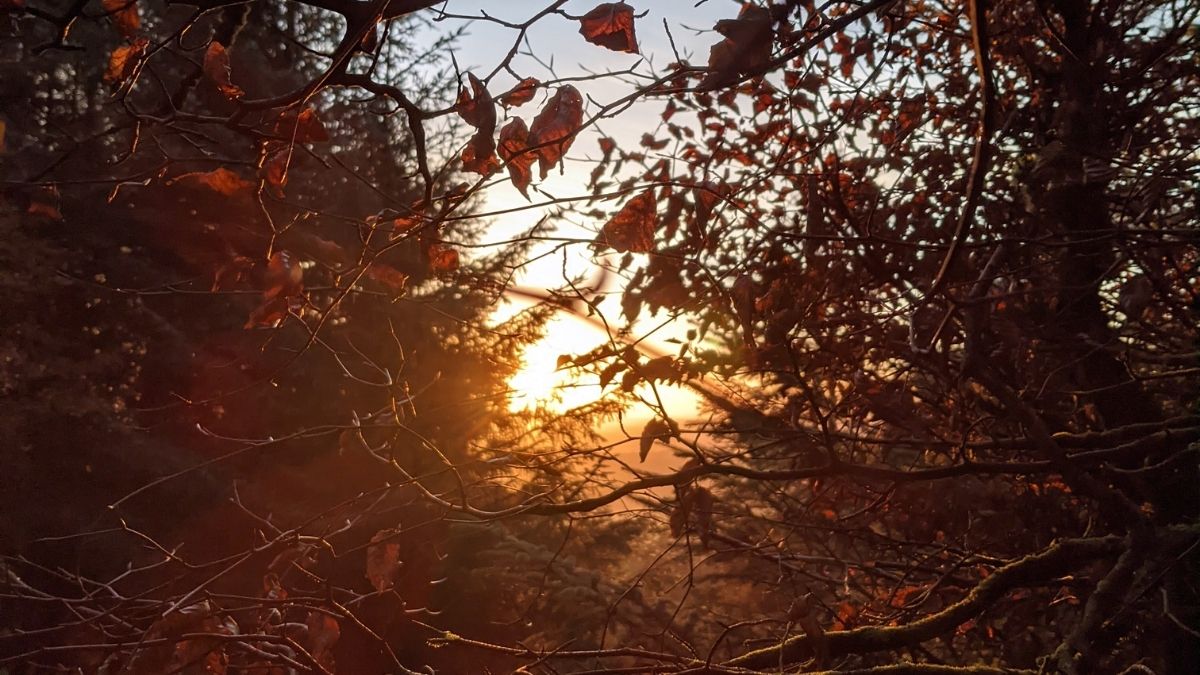 Of all the hikes in this series, this one is closest to home for me; literally, as it is within 5km of where I live in its entirety.

Like any figure of 8 hike, it can be done as 2 separate loops on separate occasions, and this may well be a good option for those venturing out with children, as the full distance is almost 9km.

While well known to locals like me, Slieve Thoul – or Saggart Hill as it is also known – and Coolmine Hill, may not quite trip off the tongue during fireside chats about places to hike in the Dublin mountains. But if you stumble upon these forest and hillside paths, like I did after I first moved to the area, you are in for a pleasant surprise.

At the western extremity of the Dublin Mountains, we might dub them the tales of two hills, such is the rich pre-history and unusual geology associated with them. 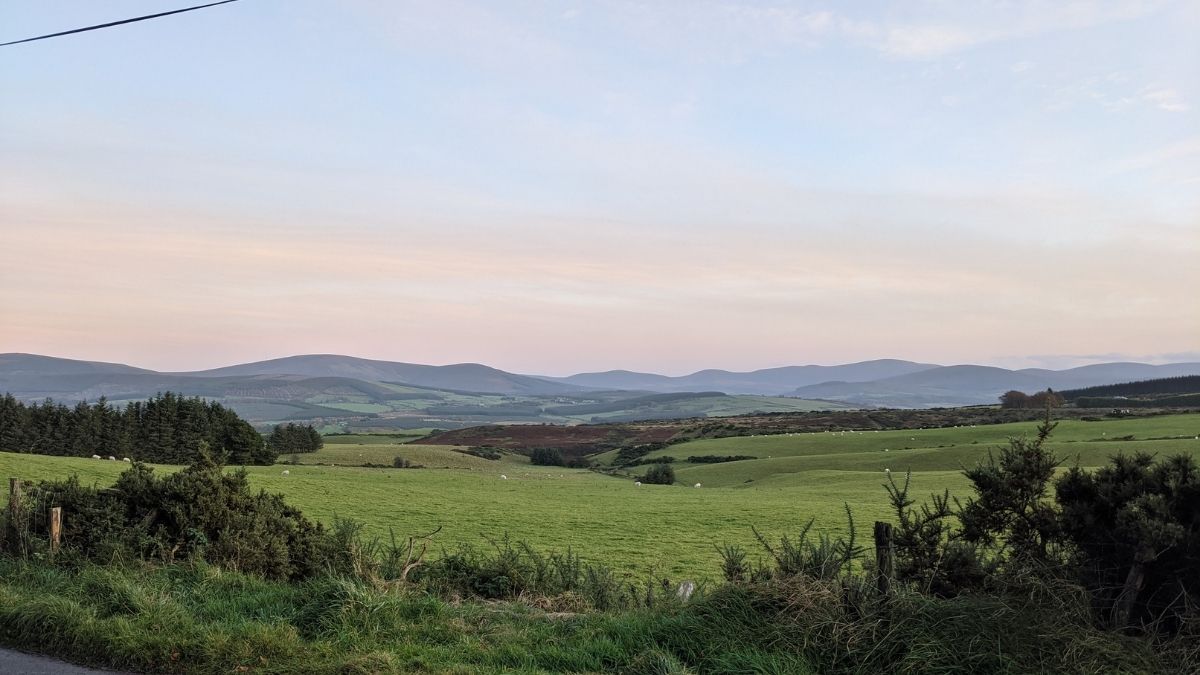 You can of course chose to start with either of the 2 loops, but here we begin with Slieve Thoul.

The name Slieve Thoul comes from the Irish Sliabh Toll, meaning mountain of the hollow. Remnants of old walls, embankments and mounds are indicative of old townland boundaries, or perhaps even the Pale boundary itself which passed through these parts, and also more ancient sites of some of the earliest settlers in Ireland. Geologically, unlike most of the Dublin and Wicklow mountains where granite predominates, the sandstones, siltstones and shale we find here were deposited in the glacial retreat from the last ice age.

From the north most Coillte barrier, follow the forest road gently uphill, turning right at the T-junction. The road curves in a wide right to left arc, eventually swinging around the far side of the summit. For the more adventurous, a trail through the forest is a more direct route to the top, and this is the route shown on the map and profile at the end of this blog. Not that we should get too hung up on the summit: if it is marked I have yet to find it, presumably removed or lost in the numerous telecommunications masts dotted around. Their juxtaposition with 2 megalithic sites perhaps suggesting that hilltops have always been used for some form of communication, plus ca change! 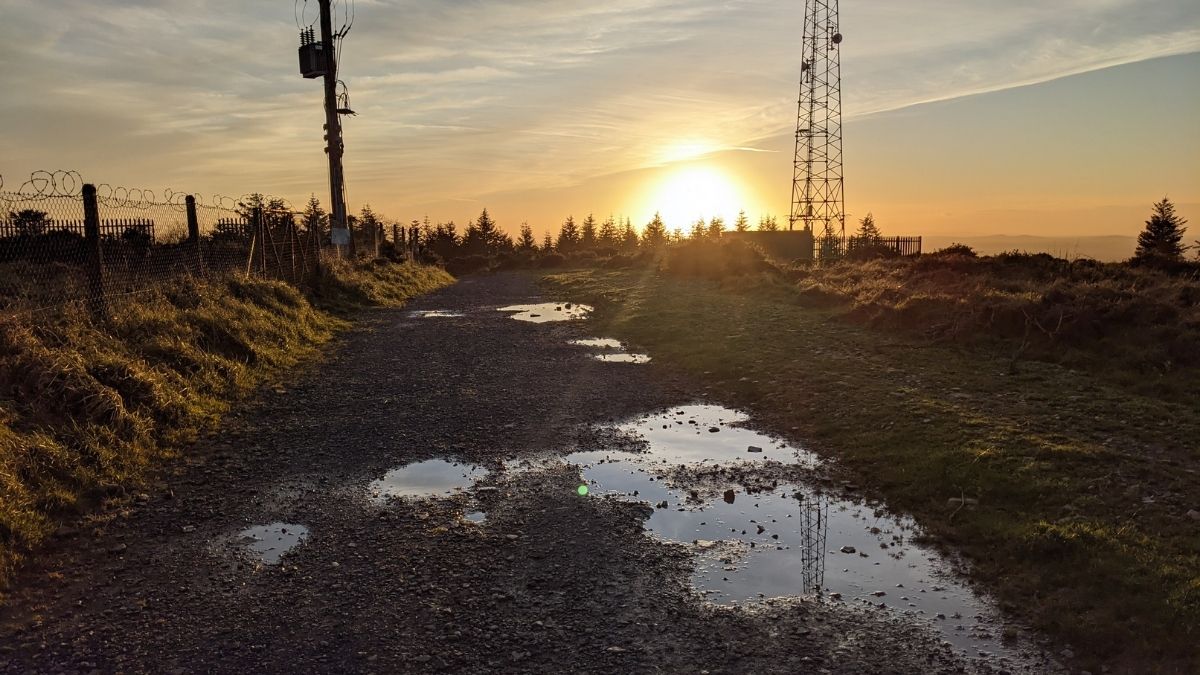 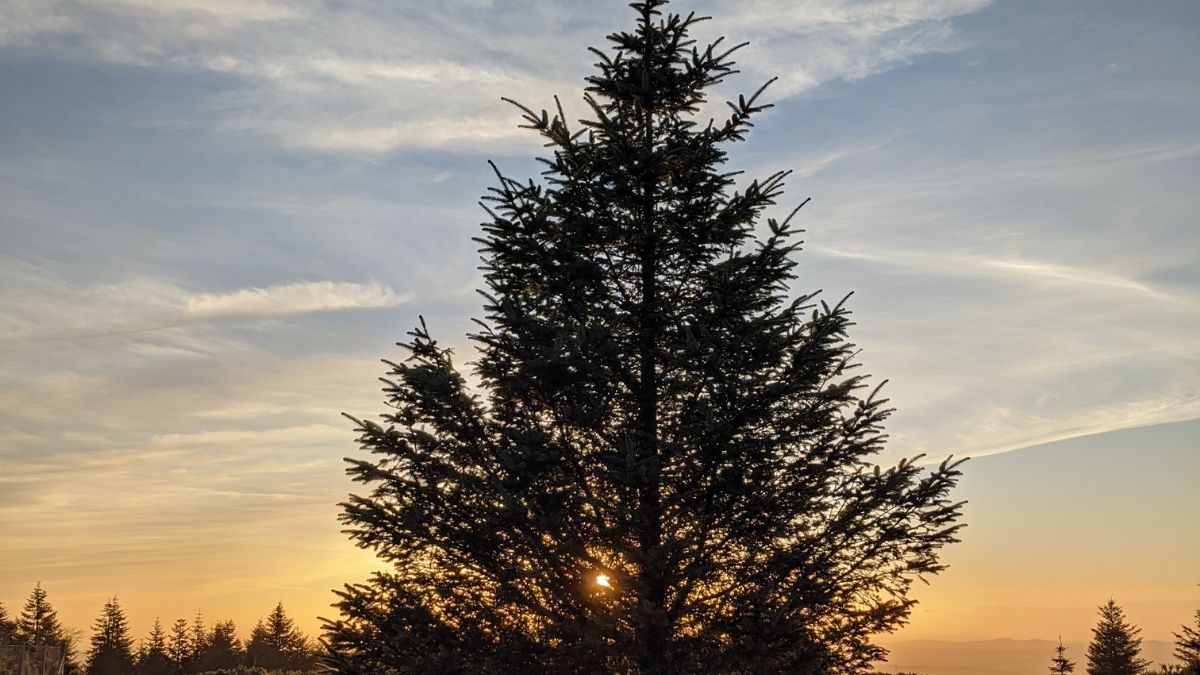 Sunset at Samhain, from the Summit of Slieve Thoul

The remains of one are in the shape of a small oval shaped mound inside of which is a hollow. It is located to the north of the masts. The second, an alluring circular opening in the otherwise dense conifers to the east. Take a look at the video clip and you’ll see why took me a few attempts to find it!

The route back down is a continuation of the main forest road that led near the summit. Follow it gently downhill in a southerly direction initially, then curving around and narrowing to a path to eventually rejoin the T-junction. Turn right back down to the lay-by. Turn left and walk along the road for 800m to a narrow path on the right. Follow this path to Coolmine Hill and Lugg Woods. 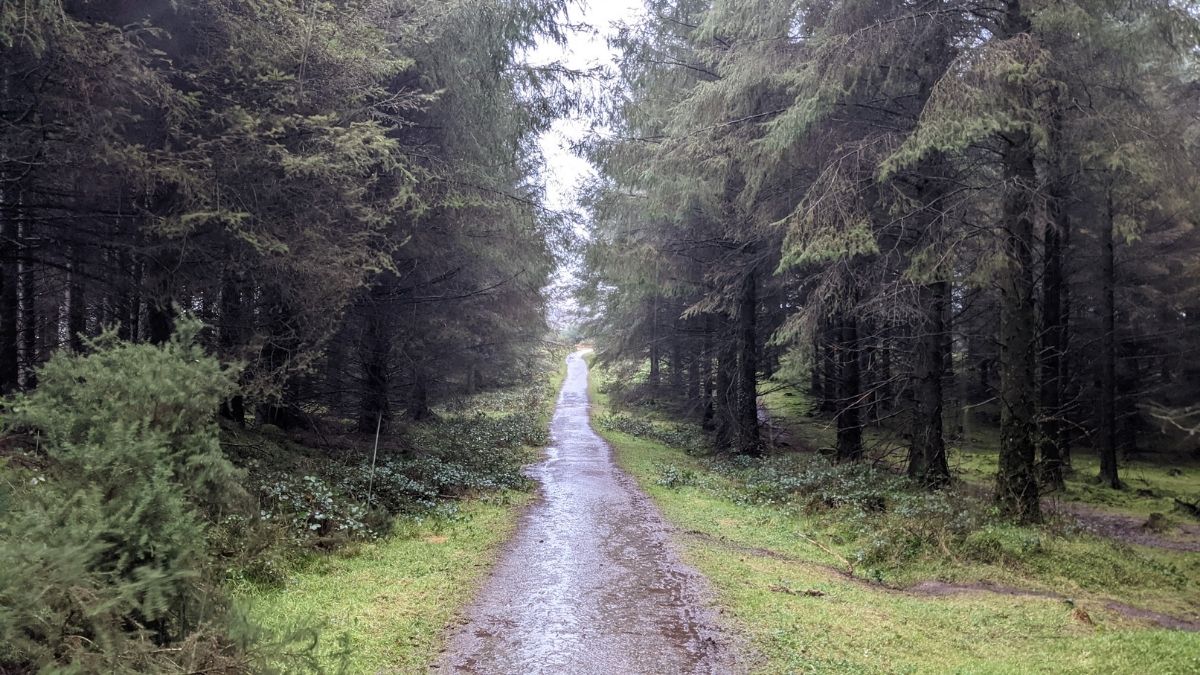 Keep right at the first junction and then turn left at the T-junction at another forest road. Follow this is in a wide left to right arc, downhill initially, uphill for a bit, and down again. Look out for a post with a notice referring to Lugg Henge, a barrow once home to a small settlement of 5 huts and later a bronze age crematorium.

You will see several paths and trails to the right, which generally lead over the top of the hill back to the first road on the other side. Along one of these paths is an embankment with the remains of what looks to be an old wall in places. A quick reference to townlands.ie reveals this to be the boundary line between the townlands of Lugg and Crockaunadreenagh. 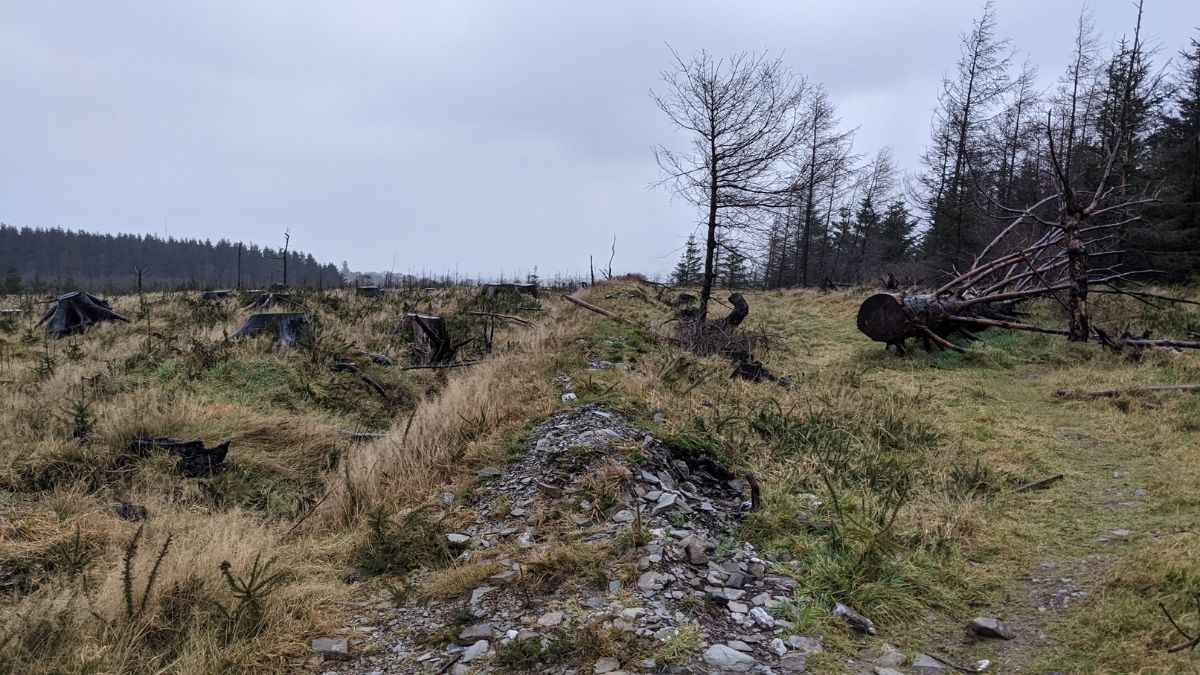 Boundary Line Between the Townlands of Lugg and Crockaunadreenagh

Continuing downhill you pass through Lugg Woods Enchanted Forest a super spot to bring the little ones on festive occasions. Hopefully it will be able to reopen again in the not too distant future.

Reaching a small parking area and main road, it appears to be a dead end, but veer right to pick up a forest trail. This winds its way back uphill on the left hand side of the forest, before joining a grassy path that leads back to the forest road. Follow this and retrace your steps back to the lay-by. 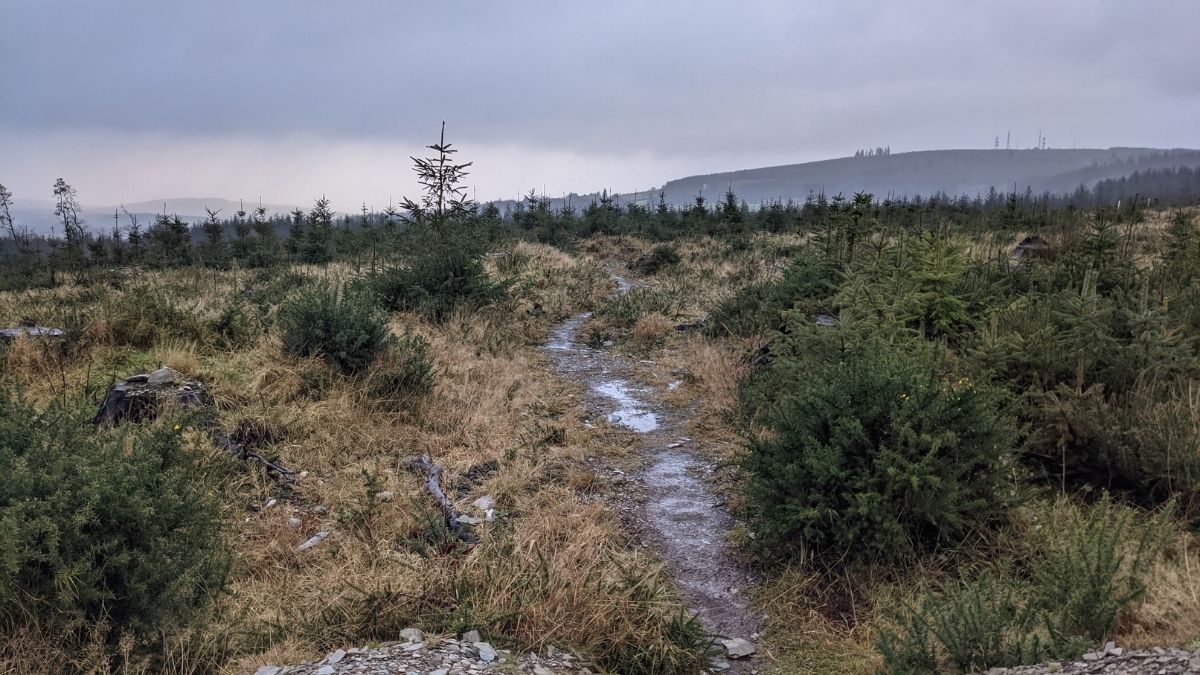 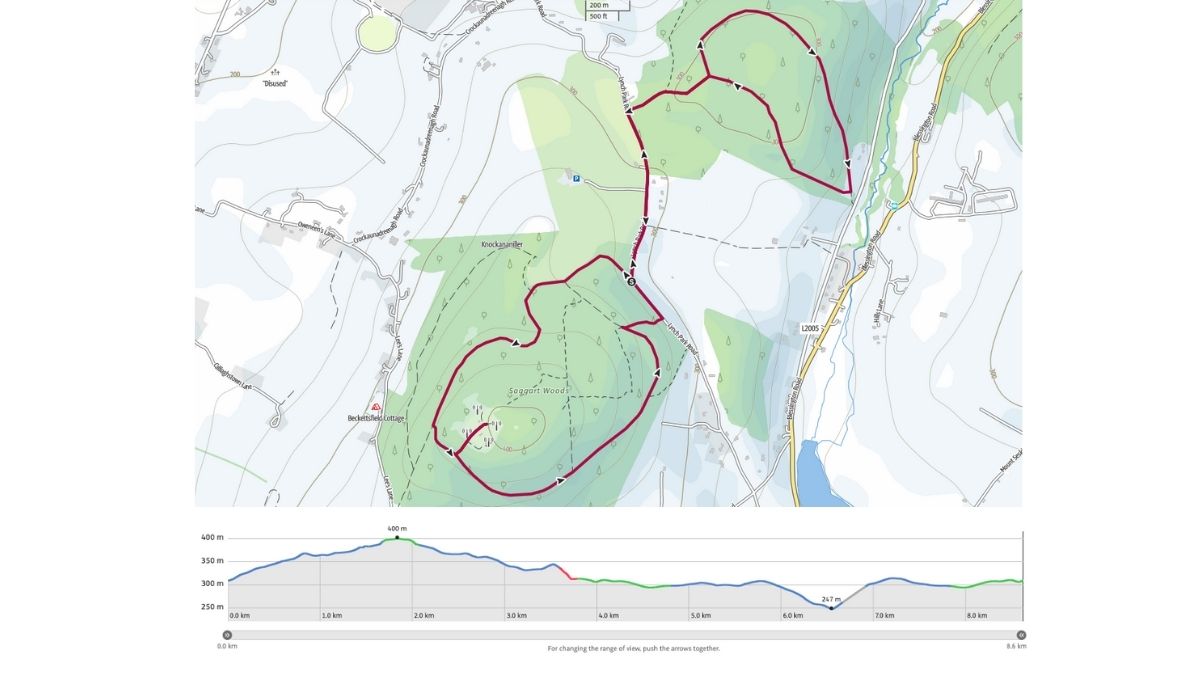 The full figure of 8 hike is just under 9km and would take approximately 2.5 to complete. Allow upto one hour for each of the Slieve Thoul and Coolmine Hill hikes if done separately.

Public transport access is not really an option, unless you’re happy to add a road walk of about 4km each way from Saggart Village. In that event, you’ll have caught the 69 bus.

Saggart is also the last stop on the Red LUAS line a further 1km away.

There are plenty of options between the nearby villages of Saggart and Rathcoole, among them Insomnia in Saggart and the Avoca in Rathcoole, both currently open for takeaway.

Again, plenty of options after re-opening is permitted in Rathcoole and Saggart, between pubs and restaurants, but my personal favourite place to eat is The Anvil a super family restaurant in Saggart. 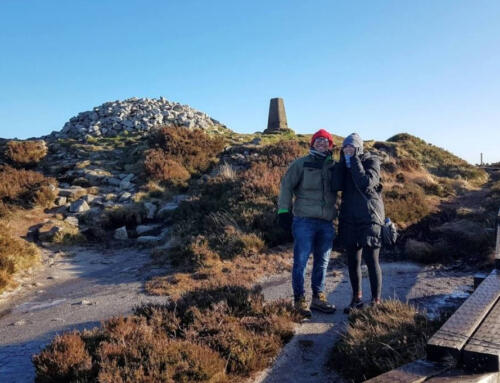 Guided Day Hikes and Walks in Ireland’s Most Beautiful Locations

COUNTDOWN OUT OF LOCKDOWN 4

COUNTDOWN OUT OF LOCKDOWN 2